Covid crisis update October 2021
We continued to run activities from the start of the Covid lockdown. We transferred our ‘Quoi de
neuf?’ discussion on to Zoom. We also organised our Thursday talks on Zoom. From September 2021 we are trying to get back to some face-to-face activity. If our members feel safe and Government regulations allow it, we hope to provide a programme as follows.

From September to May, meetings are held on the third Thursday of each month at 7.00pm.
Address: Kingsborough Gardens Sanctuary , 79 Hyndland Road, Glasgow G12 9JE.

NB: in November 2021 the meeting will be held on the second Thursday 11 November.

They are held in the sanctuary at the above mentioned address. We are not producing a programme as yet but our activities to the end of the year are starting to firm up.

We aim for a mixture of guest speakers who speak in French and social events. The evening concludes with a refreshment taken in convivial company.  The meetings finish around 9.00pm.

Thursday 17 September : “Images de Chine” – Colin Sellar. We have already had one successful session. Colin spent considerable  time in China and his photos were stunning.

Thursday 20 January: Unfortunately, this meeting had to be cancelled due to government covid restrictions.

Thursday 24 February: “Mary Queen of Scots songs” – Louise McDonald. The songs, some in French others in English, are based on poems attributed to Mary herself with music by Robert Schumann and by contemporary composers, the latter having been commissioned by Louise. This will be a broadcast via YouTube available to all our branch members as well as our friends in France (at 20 heures) and to guests of the Franco-Scottish Society members. Click on the link below on Thursday a few minutes before 7.00pm to join in.

Thursday 17 March: This event will be held jointly with and at the Alliance Française, 3 Park Circus, Glasgow G3 6AX at 6.00pm:  “An Evening with the French-Algerian novelist, playwright and actress, Samira Sedira, award winner of the Prix Eugène Dabit 2020-21 for her novel “Des Gens comme Eux” (Editions du Rouergue) translated into English as “ People Like Them” (Raven Books).”  Details…

The conversation ranges from personal news to current politics. We also frequently have a discussion theme that could be thought about in advance. Everyone is encouraged to speak but you can also just listen.

The usual attendance is between 18 and 30 with a wide variety of fluency in French. A few native speakers attend. It is a friendly meeting where conversations can flow from current events, which can be very lively, to holidays and films which can be instructive but less provocative.

This runs in conjunction with the Alliance Française. Any member of the Alliance is welcome to join our conversational group. 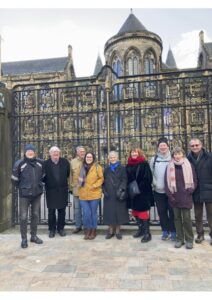 As a member you will be entitled to borrow, free of charge, books, DVDs, CDs etc from the Médiathèque at the Alliance Française.

We organise occasional ‘visites guidées en français’. We hold an annual members’ lunch in the spring and a ‘pétanque’ competition in mid-July to celebrate le 14 juillet

You may pay your membership by cheque via the post or by bank transfer. For further information, email our secretary Elizabeth Bryant ebryant96@gmail.com

In conjunction with the Alliance Française we host a  “Quoi de neuf?” discussion group from 2pm to 4pm on the first Monday of the month (except July and August) 2-3 Park Circus. In May we meet on the second Monday. In 2020 that will be Monday 11th May
For contact details see Franco-Scottish website or just come along to a meeting.

Get the latest news from the Glasgow Branch

Saturday 10 November: Franco-Scottish Society of Scotland Conference held in Edinburgh. Several members of our branch attended the lecture ‘Laïcité, religion and identity in contemporary France’ given by Emile Chabal, University of Edinburgh.

Saturday 15 December: Christmas party. We were entertained with seasonal songs in French by a talented former student of the Conservatoire who was accompanied on the piano. We were equally charmed by the voice of a first year student of French and Music playing the guitar. We went on to enjoy the buffet of delicious dishes brought by members. A warm and jolly time was shared by all.

Friday 3 May: our annual lunch was attended by some 20 members who enjoyed a delicious 3 course meal prepared and served by students in the catering department of the Anniesland campus of Glasgow Clyde College.

Friday 12 July: the annual Bastille Day pétanque tournament at Hillhead Sports Club. As in previous years, this event was well attended by members and their friends. We gathered to sing the Marseillaise following the prize giving before going on to share a convivial lunch in the club restaurant.

We supported St Charles primary school who participate annually in a film competition. This year they were selected to represent Scotland at the final stage – a two day celebration of film in Paris.  With our support more than 20 pupils were able to go on a three day visit. As well as participating in the event the group was able to have some tourist experience and use the French they had been learning in school. Their entry was commended and they were congratulated by French film directors. Committee members attended the school assembly on 18 June to learn more about the class’s experience of making the film and their visit to Paris.

Thanks to Colin Browning for taking over organising and leading this annual popular event. Approximately 32 people came to the Hillhead Sports Club to take part in the competition. Most of them are faithful branch members but we also welcomed folk from other francophile groups in Glasgow.  Most participants went on to enjoy a convivial lunch in the club restaurant.

Fête Nationale 14 juillet 2017 – Concours de pétanque
Our annual ‘pétanque’ competition was held this year on a bright and sunny 14th July. The event was once again well attended with approximately 30 participants, mostly members but we were delighted to welcome several visitors as well. The competition has been superbly organised for ten years now by our long-time member Joe Cent and his wife Zara. They enhance the French atmosphere of the gathering by arriving in their 2CV, flying a very large ‘tricolore’. We play at varying levels of ability but it is always a fun occasion for all. Winners are rewarded with bottles of wine. Following the prize-giving, most of the group stay to enjoy a convivial lunch at the sports club restaurant. Sadly, this year is the last time Joe and Zara have hosted the event. At the start of the lunch, our immense gratitude was expressed to them for faithfully hosting this gathering over the past decade. Plans are in the pipeline for our Glasgow branch to continue the tradition of this great event to enable us to come together and celebrate the ‘Fête Nationale’.

Approximately 25 of our members attended a guided visit in French at the Hunterian Art Gallery of the exhibition The Truest Mirror of Life: 19th Century French Caricatures by Dr Greg Kerr of the University of Glasgow Languages Department. He was also the co-curator of the exhibition. Caricature features strongly in The Hunterian collections and The Truest Mirror of Life reflects the rising popularity of the genre in 19th century France. After the visit, several members gathered at a café nearby for a friendly time chatting to one another.

Our President Gerry, Treasurer and Secretary were pleased to attend a ceremony at the High School of Glasgow to award the Franco-Scottish Society of Scotland Prize 2017 to Joseph McGrath Williams who attained the highest mark in Advanced Higher French. He shares this achievement with two candidates from an Edinburgh college. Gerry made a short speech and gave Joseph his certificate and cheque for £200. Joseph informed us he is studying medicine at Oxford University and is a member of the French Club.

Once again, everyone was welcomed with a cup of traditional vin chaud made by Janine. We were pleased to host the Ullapool String Quartet, an amateur group featuring two of our members, Deborah Rutherford and Rona Gaffney. Rona’s husband David and their friend Christine Bucknall. They performed sophisticated arrangements of Christmas songs and carols and we were led in the singing by Ian and Catherine Robertson. Bill Daly sang Cholesterol by Adam McNaughton. Suggesting we should avoid rich food, this lively song has obvious seasonal connotations. Following the entertainment, we all gathered for a convivial and joyful time eating the delicious food of savoury and sweet dishes contributed by all our members.

The lecture was held on Saturday 12 November in Glasgow City Chambers. Over 70 people arrived to hear Dr Frances Fowle of the Scottish National Gallery and Edinburgh University talk about the art collectors in the late 19th and early 20th centuries in and around Glasgow and in particular their interest in French contemporary art. Dr Fowle is Senior Curator of the National Galeries and also lectures in Edinburgh University. She is also the author of the biography of Alexander Reid, the well-known Glasgow art dealer. He shared a flat in Paris with the van Gogh brothers.  Vincent van Gogh’s portrait of Alex Reid is in the Glasgow Museums collection.

The talk was thoroughly entertaining and informative.  More than 50 members of the Franco-Scottish Society branches across Scotland then enjoyed lunch in the Cote Brasserie in West Nile Street.