A nationwide competition to support French learning in Scottish schools 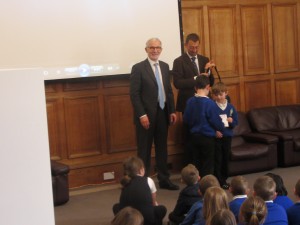 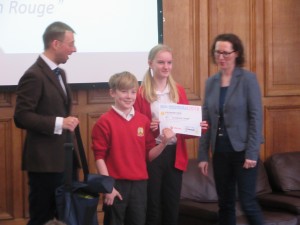 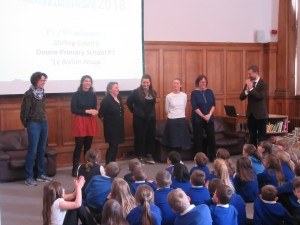 The teachers at the French Institute

The winners of the first prize in each category were invited to attend a special French immersion day on 23 March 2018 at the Institut français d’Ecosse to celebrate the international day of la francophonie. Transport and lunch for the entire class were offered. Winners took part in French workshops and received a selection of French books. A similar award ceremony and immersion day will be organised in remote winning schools.
The winners of the second prize in each category and of the prix spécial were awarded a selection of French books
This school competition is sponsored by TOTAL E&P, the Franco Scottish Society and is organised in partnership with the Alliance française de Glasgow, SALT, SCILT, the University of Edinburgh and TV5 Monde. 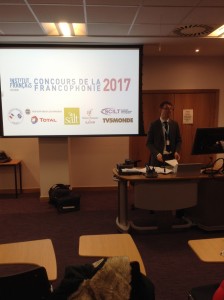 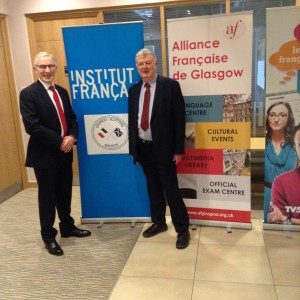 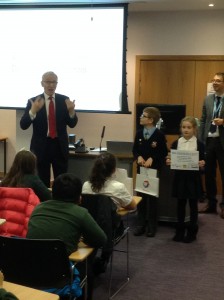 Three winning schools of the “Concours de la francophonie” received their prizes at the special Award ceremony hosted at the University of Edinburgh on Friday 17 March by Emmanuel Cocher, Consul general of France in Edinburgh and Glasgow.
La francophonie is thriving in Scotland as a majority of children now learn French from P1. To celebrate this renewed engagement with languages, the Institut français d’Écosse launched in 2016 a national French competition, to celebrate the international day of la francophonie with all young learners across Scotland.
This student-led competition is designed to value creativity in French and allow a large participation of all primary and secondary schools. Learners are invited to film a short piece, dialogue, song, play, report or any other production in French. The competition is organised in two phases: Local Authorities choose their local champions and a national jury select the winners. For this second edition, various Local Authorities including Shetland Islands Council and Orkney Islands Council, and various independent schools.
87 learners from three of the four winning schools will attend the ceremony, on 17 March at the Outreach Center at the University of Edinburgh. The ceremony will be preceded by various activities in French conducted by students of French at the University of Edinburgh and teachers of the Institut français d’Écosse. 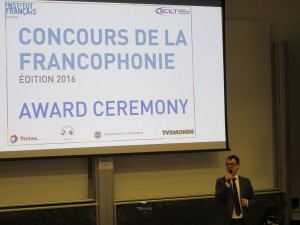 The Award Ceremony for the Concours de la Francophonie took place at Edinburgh University on Friday 18th March 2016 in the presence of the French Consul General/Director of the French Institute.  Pupils from schools in several regions of Scotland were present in the lecture theatre of the David Hume Tower.  The event was hosted by Thomas Chaurin, French Education Officer at the French Institute.  After the event, a buffet lunch was served and enjoyed by all participants.  The Edinburgh Branch of the Franco-Scottish Society is delighted to have helped support this  event, which encourages the learning of the French language and culture in schools across Scotland.

Concours de la francophonie 2016
Le concours de la francophonie was launched in January 2016 to showcase the results of the new language policy of the Scottish Government, to support French language learning, and to celebrate the international day of la Francophonie. Here are the main observations after this first edition.
1. Large participation for a first edition with 18 Councils and several Independent schools submitting 37 semi-final entries.
Councils enjoyed organizing the semi-finals. It gave them an opportunity to engage with all their primary and secondary schools where French is taught. They found this competition easy to organize with little logistics as schools had to submit video entries.
Students and schools submitted very creative videos, with a wide range of “mises en scène”. Looking at the enthusiasm of the students, it is obvious that they had a lot of fun!
The national jury was composed of major actors in language teaching (SCILT, Education Scotland and Scottish Government), giving credibility to the competition.
2. High profile award ceremony at the University of Edinburgh, giving visibility to the French language.
The event gathered 111 students and various guests from across Scotland. This ceremony was an opportunity to showcase the vitality of the French language in Scotland. School students enjoyed the activities in French, the prizes and the lunch.
Students who could not attend the ceremony benefited from an immersion day in their school. The Entire staff of the school made that day a French celebration, with parents and media in attendance.
3. Successful partnerships.

The excellent collaboration that the Institut français d’Écosse has established with all Councils across Scotland, to support French teaching and learning, made this concours possible.

The concours is also the result of a successful partnership between the Institut français d’Écosse, SCILT, TOTAL E&P UK, the Franco Scottish Society and TV5. The branches of Aberdeen, Edinburgh and Inverness made a total donation of £1500, and TOTAL E&P matched that amount, allowing to pay for buses, prizes, French activities, and lunch.

This first edition was organized in only 3 months and was a great success:
– A factor of motivation for students, teachers, schools
– Visibility for the French language, by far the most learned language in Scotland.

Next year, the concours will be launched in August 2016 to give more time to schools. More councils will take part and in 2018, hopefully, the 32 councils of Scotland will participate, making it a truly national school competition.

A new nationwide competition in Scottish schools to support French learning – le Concours de la Francophonie
In 2016, the Institut Français d’Ecosse in partnership with SCILT, Scotland’s National Centre for Languages, launched, with great success, le Concours de la Francophonie, a new national competition to support French learning in Scottish schools and to encourage all young French language learners and their teachers around Scotland to celebrate the international day of the Francophonie.
Schools who wish to take part in the competition, are asked to submit, electronically, an activity of their choice (drama, music etc.) in French. By December the local education authorities select winners for the semi-finals from their area. At the end of January a national panel made up of representatives from the world of education selects the final winners for Scotland. The two best entries are picked from four categories, two at primary level (P1-P4, P5-P7) and two at secondary level (S1-S3, S4-S6). This formula allows each of the 18 participating councils to bring their schools together to celebrate locally the success of the 1+2 foreign language policy which has now been implemented throughout Scotland. In the third week of March the national winners are invited to an award ceremony and to celebrate la Francophonie in Edinburgh. On the day, they are offered lunch, French workshops and receive a selection of French books. Winning schools which are not able to travel to the capital are offered a French immersion day in their school, with French native speakers leading activities and games in French. The runners-up receive a selection of French books.
The first edition of le Concours de la Francophonie was hosted by the University of Edinburgh on 18th March 2016 and was an occasion to showcase this new vitality of la Francophonie in Scotland. It was made possible thanks to the financial support of the Franco-Scottish branches of Aberdeen, Edinburgh and Inverness and the matching grant from TOTAL E&P UK.
The competition has shown how vibrant French language teaching is throughout Scotland and falls clearly inside the remit of the Franco-Scottish Society in its pursuit of encouraging French language and culture.

The Institut français will visit Mid Yell Junior School in June to give their award and prizes to the winners and offer them French activities.
Emmanuel Cocher, Consul general of France and Director of the Institut français d’Écosse said: “La journée mondiale de la francophonie, the international day of la francophonie, is indeed a very special day which brings together French speakers, learners and teachers, to celebrate the French language and the dialogue between cultures.” He added: “Thanks to the 1+2 policy, all students now learn two additional languages in schools and a clear majority have chosen French as their first modern language. This ambitious and exciting policy will have a positive impact on language uptake in schools, and will open new horizons to all young Scots.”
The organisers:

The international day of la Francophonie is celebrated all around the world on 20 March.