THE LANSDOWNE FUND began with generous gifts from the 8th Marquis of Lansdowne (1912-99), former President and Honorary President of the Society and was been augmented with the proceeds of an appeal in his memory. The Fund meets the costs of the Lansdowne Prize and Lecture.

THE LANSDOWNE PRIZE is awarded annually to the candidate who achieves the highest mark in Advanced Higher French.

The winner in 2006 was Imogen Whiteside from Robert Gordon’s College, Aberdeen.

The winner in 2007 was Emily Frier, George Heriot’s School, Edinburgh.

The winner in 2008 was Sophie Macnair, from Mary Erskine School, Edinburgh. Her prize was presented to her by Sir David Edward, President of the Franco-Scottish Society, at her school.

The 2009 Lansdowne prize was awarded to Katie Dochertie, a student of St Aloysius College Glasgow. She is now studying Law at Glasgow University. The prize was awarded by the National Vice-President Janine Adamson and the past President of the Glasgow Branch, Jacqueline McNeill.

The 2010 Lansdowne Prize was awarded to Sam Dickinson, a pupil of Mackie Academy in Stonehaven. The Prize was presented to Sam by Janine Adamson, National Vice-President of the Franco Scottish Society.

Sam broke his neck in a horrific car accident in 2009, and spent 7 months in the Spinal Unit of the Queen Elizabeth II Hospital in Glasgow. However, supported by his devoted family, his dedicated teachers and his caring friends, he obtained remarkable results in all his Advanced Higher subjects.
He was accepted to read Economics and Politics at Merton College in Oxford.

Janine Adamson and Rhona Bean, the Secretary of the Aberdeen Branch of the Franco Scottish Society were delighted to congratulate Sam and to meet his family, his teachers and his headmaster.
This young man’s story is truly inspirational and we wish him all the best in his future studies!!! 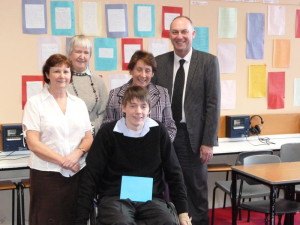 The Lansdowne Prize for 2011 was awarded to David Maguire of the High School of Glasgow.   The Prize was presented by Janine Adamson, National Vice-President and Rosalyn Faulds, National Secretary and President of the Glasgow Branch.

David went on to study Civil Engineering at Imperial College London where he is also continuing to develop his French by means of an advanced French module. He also has the possibility of undertaking some of his studies in France or some other European country.

David’s parents; Martin Bennie, Head of Modern Languages; Colin Laird, the Head Teacher and the present group of Advanced Higher Language students were there to see David accept the Lansdowne Prize for the highest mark in Scotland in the Advanced Higher French examination. 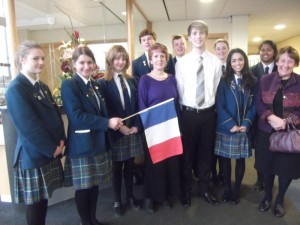 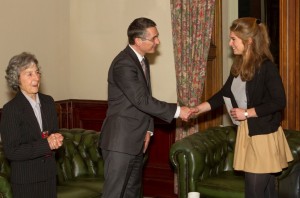 In 2013 the Lansdowne Prize was awarded to two students who came equal top in Advanced Higher French.  They were Douglas Clark from Grove Academy in Broughty Ferry and Thomas Oldham from Robert Gordon College in Aberdeen.  The prizes were presented by the St Andrews and Aberdeen branches respectively.

The Lansdowne Prize in 2014 was won by Sarah McArthur of Edinburgh College who received her prize from the Society’s President Lord Brodie and Tom Wight and Anne-Colette Lequet of the Edinburgh branch.  Sarah is now studying Sustainable Development at St Andrew University.

The winner in 2015 was Harry Johnston of Balfron High School who received his prize from Gerry Toner, president of the Glasgow branch accompanied by vice president Colette Blazy-Mackie and treasurer Cécile Docherty.  Harry has gone on to study French and Film Making at St Andrews University.

THE LANSDOWNE LECTURE.  Every second year an eminent speaker is invited to talk on a theme of Franco-Scottish interest before an audience made up of members, guests and the general public.

In 2000 the Lecture was given by Professor Siân Reynolds of the University of Stirling who spoke on “Professor Geddes goes to the Exhibition: Patrick Geddes’s international diplomacy at the 1900 Paris World’s Fair”; her lecture was published in the 2001 issue of the Society’s Bulletin.

The 2002 Lecture was given by HE Jean Guéguinou, Ambassadeur de France and Honorary President of the Association Franco-écossaise, who chose as his theme “Cultural Diversity: France’s Strategy. Europe’s Ambitions”; his lecture appeared in the 2003 Bulletin.

The Lansdowne Lecture in 2004 was given by Professor Hew Strachan, All Souls College, Oxford, in Glasgow City Chambers. The subject was “Cemented by war: the Entente Cordiale and the First World War”.

In 2006 the Lecture was given by Dr Jamie Reid Baxter in the National Museum of Scotland, Edinburgh. The subject was: George Buchanan: Scotland’s Voice in France.  This marked the five-hundredth anniversary of the birth of George Buchanan, historian, scholar and teacher. Dr Reid Baxter has very kindly donated the text of the lecture along with a selection of sung psalms.
You may download the text of the lecture by clicking here for Buchanan.doc.

The psalms are in mp3 format.

In 2008 the lecture was: The Scottish Colourists given on 13 November 2008 in Perth Concert Hall by Philip Long, Senior Curator, Scottish National Gallery of Modern Art.
The 2010 Lansdowne Lecture was hosted by the Glasgow City Chambers on 18 November, 2010.  Professor Pamela Robertson is an acknowledged expert on Charles Rennie Mackintosh work.  She gave us a masterly lecture on the watercolours that Mackintosh painted in the Roussillon in and around Port-Vendres.  Professor Robertson explained how his experience as an architect, his drawing expertise and his interest in the natural world inspired his painting and made his watercolours unique and instantly recognisable.

The lecture was attended by over 80 guests. The day was made more memorable for some of our visitors by the museum visits and the lunch arranged by some members of the Glasgow Branch of the FSS and their President, Jacqueline McNeill.

The Lansdowne Lecture of November 2012 took place in the Royal Society of Edinburgh.  His Excellency The French Ambassador, Monsieur Bernard Emié, spoke on the subject
“the United Kingdom and France, two major players in Europe and in the world”
The Ambassador spoke of the importance of Franco-British relations in present-day Europe, highlighting the areas of collaboration between the two nations and their close links in several key areas of economic activity,

The 2014 Lecture was on the topic of Two Kingdoms in Peril, Scotland and France (1418 – 1429), Military and Diplomatic Relations.  Professor Philip Contamine, Emeritus Professor of Mediaeval History, University of Paris-Sorbonne, spoke on Scottish Military Assistance to Charles VII, “King of Bourges”.  He was followed by Professor James Laidlaw, Emeritus Professor of French, Aberdeen University, Honorary Professor Edinburgh University who spoke about The Treaty of Perth (1428) – The Embassy of Alain Chartier.  The Lecture was held in the historic St John’s Kirk in Perth.

The 2016 Lecture was given by Dr Frances Fowle, ECA International Director, Reader in History of Art, Senior Curator at the Scottish National Gallery. The title was “Dealing in Impressionism; Alex Reid and the Scottish taste for French 19th century Art” The lecture took place in Glasgow City Chambers, Glasgow on 12th November 2016.

VISITS TO AND FROM FRANCE

These visits take place every second year and are opened to members.  The Scottish and the French Societies take turn in organizing the visits which last a week.

Visit of the AFE in Perth 21-28 September 2010
On the 21st September, a group of l’Association Franco Ecossaise was welcomed to the Royal George Hotel in Perth.  Members of various branches of the Franco Scottish Society had prepared an interesting programme of guided visits to places of interest. The visit was a great success and concluded with a civic reception hosted by the deputy Provost of Perth followed by a gala dinner attended by 62 guests.
There is an illustrated account of the AFE visit in the 2010 National Bulletin of the Franco-Scottish Society 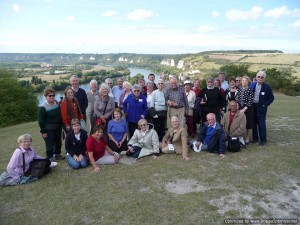 Exchange Visit 2-9 June 2014 – Islands Idyll
Members of the Association Franco-Écossaise visited the west of Scotland in June 2014.  From their base in Prestwick the group visited Arran, Burns Cottage and Burns Museum, Dumfries House, Rothesay and Mount Stuart. The group then travelled north to Oban from where they enjoyed tours to Auchendrain, Arduaine Gardens, Mull and Iona and finally Cruachan Power Station.